The Differences Between Gelato and Ice Cream

Summer is in full swing, and for many of us that means long evening walks, the beach, and frozen treats. What’s better than slurping four or five scoops of chocolate chip cookie dough or mint chocolate chip out of waffle cones or, if you’re lucky, personalized ice cream cups? Well, you’ve probably heard about gelato, and it’s quickly become most people’s preferred choice for a summer dessert. If you haven’t jumped on the gelato bandwagon– or even if you have– you’re probably wondering about this new buzzword and why people are willing to settle for gelato when ice cream, the American mainstay, is still around. 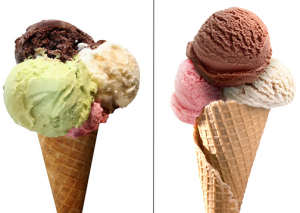 Mind you, there’s certainly no reason why you’d have to give up ice cream and declare complete allegiance to gelato. In fact, the neat thing about gelato is that it’s actually fairly unique from ice cream in a lot of ways, so traditional ice cream people and edgy, mold-breaking gelato enthusiasts can get along just fine and even be one and the same! But first off, probably the most immediate thing everyone notices when they switch over to gelato is that, while you can pay for a huge amount of ice cream and eat it with a spoon, lick it out of a fancy cone, or blend it into a milkshake, gelato usually comes in much smaller amounts and is pretty much only eaten with small spoons out of white paper cups. Why is this?

This is the primary difference between ice cream and gelato. See, ice cream is made from a custard that’s cooked up from milk, cream, sugar, and egg yolks. After this is cooked and cooled, it gets churned, which effectively beats and whips the custard up, filling it with air. This makes ice cream smooth and fluffy and gives it that distinct texture you don’t really find anywhere else.

On the other hand, gelato is basically intense ice cream. It’s made from a very similar custard base, but with more milk and a lot less cream and eggs. Depending on the recipe, some flavors of gelato actually use no eggs. Gelato custard is then churned with a much slower method that is designed in keep as much air as possible, which results in a silkier and denser end product. So even though you might eat much smaller amounts of gelato out of custom printed cups, that’s because you’re technically getting a lot more per bite.

Tip of the Day

Make the Store Your Last Choice Most people's default response is to go to a store anytime they need something, but that's not the only way to obtain a needed item.