How Gelato is in a Class of Its Own

A common question that many people ask is, “what’s the difference between gelato and ice cream?” Well for one, gelato’s fat content is significantly lower than ice cream’s. Another is its creamy, milky texture that takes on an identity of its own. But, what makes gelato really separate itself from the rest of the pack? 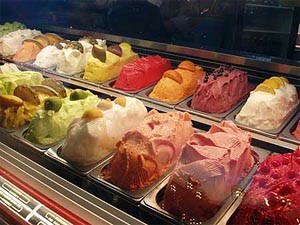 Gelato is Italy’s version of ice cream. Its full flavor, rich texture, and low fat content are all contributors of why it is so popular today. There are several unique characteristics about gelato that make it different from other desserts.

The amount of fat in gelato is almost less than half of what ice cream contains. There is no drop in flavor simply because there is less fat to coat your palate. When gelato is created it is less solidly frozen than ice cream. This causes it to melt faster in your mouth and release its full flavor.

Gelato’s rich and creamy taste comes from a low air density. Ice cream manufacturers often double their quantity by packing in more air. By doing this, their quality is cut nearly in half. Gelato, on the other hand, is churned at a low speed resulting in less air coming into the base and resulting in a richer flavor.

Italians usually eat gelato when it’s not completely frozen solid. It should always be served soft and maintain a creamy texture. One option is to take a bowl of frozen gelato and microwave it for about 10 seconds. This should soften the gelato, therefore making it easier to scoop.

If you are looking to immerse yourself in the Italian gelato experience, try using gelato spoons instead of regular spoons to eat with. They won’t make the gelato taste any more delicious than it already does, but they offer a different experience.

Similar in size to small tasting spoons, they are shaped like a flat-end shovel. While you can find larger ones, the smaller spoons work better when you are serving your gelato to guests.

These spoons can be found on many online dessert shop suppliers that sell everything from color changing straws to frozen yogurt spoons. For the aspiring ice cream salesman, you can create your own shop in the comfort of your kitchen.

Gelato’s rise to popularity came through its honest, bold flavor. Since its inception in Italy, it has transformed the world of frozen desserts and is now served in countries all over the world.
————————————————————————————

Tip of the Day

Make the Store Your Last Choice Most people's default response is to go to a store anytime they need something, but that's not the only way to obtain a needed item.